Be wise in the way you act toward outsiders; make the most of every opportunity. Let your conversation be always full of grace, seasoned with salt, so that you may know how to answer everyone. - Colossians 4:5-6 https://www.biblegateway.com/passage/?search=Colossians+4%3A5-6&version=NIV 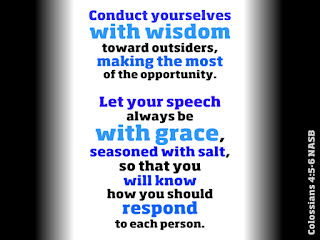 DID YOU KNOW: Where was Jesus before the New Testament?

Where was Jesus before he was born in 1 B.C.?

The Bible is very clear about the identity of Jesus Christ:

So, if Jesus is God and God is eternal (always existing), then where was Jesus before the New Testament begins?  This is a question that has sent Christians from the earliest times searching the Old Testament.

First, nowhere in the Old Testament is there a character known as "Jesus" who is obviously the same person.  ("Jesus" is the same name as Joshua, but the Joshua we know from Moses time is NOT the son of God.)  This is one reason why the Jews of his own time were perplexed when he appeared.  Many had come claiming to be the Messiah, so until there was proof he was just one more potential charlatan.

Second, there is evidence that the Trinity has been there from the beginning.  In Genesis, God refers to Himself as "we" and "us" repeatedly during creation.  (Of course, this is not proof, merely evidence.  The story of Creation is poetry, which allows some linguistic freedom, and there are cases of human kings referring to themselves as "we" and "us", as well.)

Then God said, “Let us make man in our image, after our likeness. And let them have dominion over the fish of the sea and over the birds of the heavens and over the livestock and over all the earth and over every creeping thing that creeps on the earth.” - Genesis 1:26

Third, there is a character int he Old Testament who shows up again and again, who is always doing God's work, and who appears to have great power.  He is called "the Angel of the Lord" and is always associated with an appearance of God Himself.
...and there are many more appearances.  Did you notice a common theme in all of these cases?  The Angel of the Lord is a savior.  He speaks for God and he opposes Satan.  This is almost exactly the way Jesus presented himself in the New Testament.

BIBLE NEWS: First Bible Printed in England to be Auctioned

The Bible was first written down thousands of years ago.  But the last few centuries have seen it translated into many different languages.  A landmark was the Tyndale Bible printed in English in England in 1526.  A copy of this historic run is being auctioned off and is expected to bring £35,000 (about $39,000).


Tyndale’s Bible was taken to be a direct challenge to the hegemony of the Roman Catholic church and English laws to maintain the church’s position. After being arrested in Antwerp, Tyndale was executed as a heretic in 1536 and copies of the book discovered in Britain were burnt.Henry VIII eventually ordered four English translations of the Bible to be published in England, less than four years after Tyndale’s death by strangulation.


It was Palm Sunday but because of a sore throat, 5-year-old Johnny stayed home from church with a sitter. When the family returned home, they were carrying several palm fronds. Johnny asked them what they were for.
"People held them over Jesus' head as he walked by," his father told him.
"Wouldn't you know it," Johnny fumed, "the one Sunday I don't go and he shows up."

PHOTO OF THE WEEK: A Different Kind of "Bible Quiz" 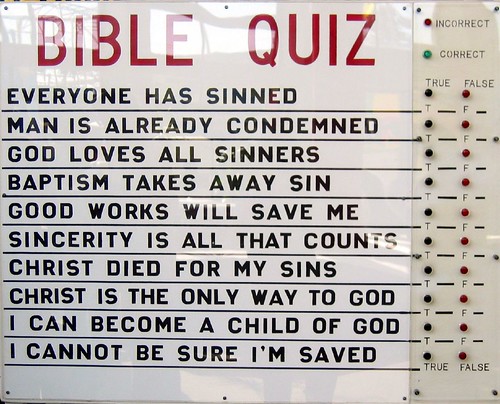 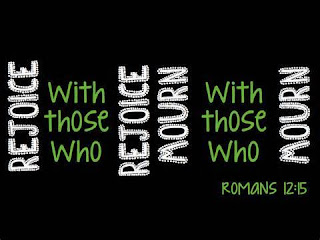 DID YOU KNOW: Some Biblical Stats

What are some interesting statistics about the Bible?

The Bible is a long book (or rather collection of books) and has been around for a long time, so scholars have had plenty of time to crunch the numbers.

We wish a VERY happy to day to all the fathers in Bible Quizzing.  We greatly appreciate all you for your kids and our ministry.  We know without you, all of our lives would be far harder and scarier. 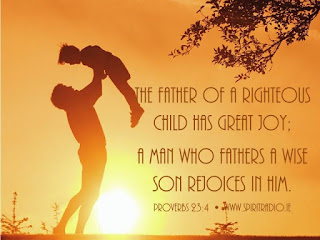 
After explaining the commandment to honor your father and mother, a Sunday School teacher asked her class if there was a commandment that teaches us how to treat our brothers and sisters.
One boy, the oldest in his family, immediately answered, "Thou shalt not kill."

WEEKLY COMIC: No need to squint

Rejoice always, pray without ceasing, give thanks in all circumstances; for this is the will of God in Christ Jesus for you. - 1 Thessalonians 5:16-18 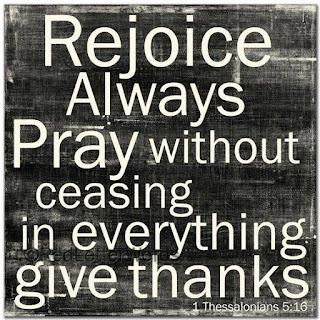 DID YOU KNOW: Where did the word "Christian" come from?

Where did the word "Christian" come from?

But it is not what early believers called themselves.  In Acts, we see the Apostles and earliest followers of Christ referring to their religion as "The Way" and themselves as "Followers of the Way."  In fact, the earliest uses of the term "Christian" are not by believers, but their opponents (Acts 11:26 & Acts 26:28).  And only in 1 Peter 4:16 - written between 60 and 100 A.D. when he was an old man - does a writer of scripture use the term in a positive light.

"Christian" literally means "little Christ".  It was intended as an insult.  But early believers, after initially disliking the term, decided to embrace it as their own.  After all, in the end, what we all want is to be "little Christs" - people striving to be like Jesus in our world, to show humanity the love of God.
Posted by Nomad at 6/15/2015 03:00:00 AM
Labels: Christian, did you know, DIDYOUKNOW, etymology, factoid, history, language

Coach Mark's photos from the year-end party are up and ready for your enjoyment!  Click on the image below for the whole set. 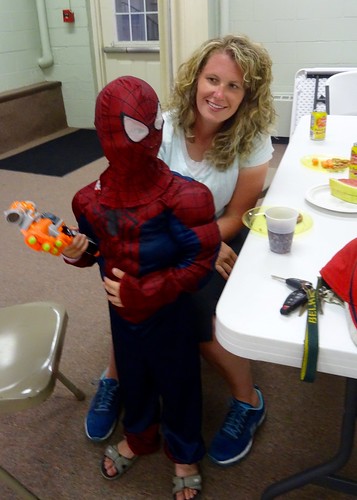 
A pastor I know has a standard liturgy for funerals. To personalize each service, he uses the Find and Replace command on his computer to replace the name of the deceased from the previous funeral with the new name.
The next morning, the funeral was going smoothly until the Apostle's Creed. "Jesus Christ," the congregation read from the program, "born of the Virgin Edna..."

MUSICAL INTERLUDE: God of the Impossible 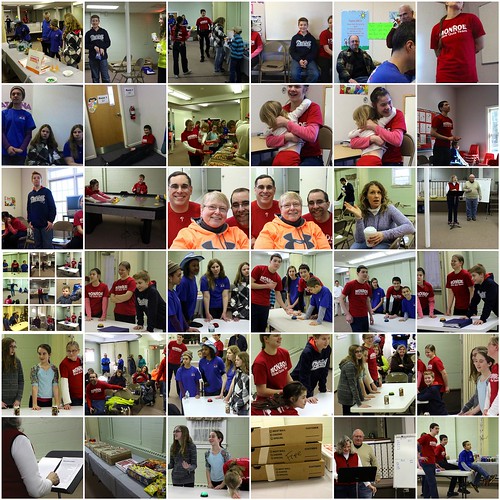 Trust in the Lord with all your heart, and do not lean on your own understanding.  In all your ways acknowledge him, and he will make straight your paths. - Proverbs 3:5-6 (ESV) 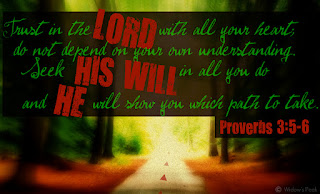 DID YOU KNOW: What are the names of God?

What names does God have in the Bible?

Names are very important things in scripture.  God gave new names to many of His chosen people, to signify the change in their status or identity. Abram ("high father") became Abraham ("father of many nations").  Jacob ("deceiver") becomes Israel ("wrestles with God").  A name isn't just an equivalent for "that guy", but rather defines who we are.

So what names does scripture give for God?  You may be surprised just how many names He has!


At Sunday School they were learning how God created everything, including human beings. Johnny was especially intent when the teacher told him how Eve was created out of one of Adam's ribs.
Later in the week his mother noticed him lying down as though he were ill, and said, "Johnny, what is the matter?"
Johnny responded, "I have pain in my side. I think I'm going to have a wife."

HUMOR: What makes for a good sermon?


The secret of a good sermon is to have a good beginning and a good ending; and to have the two as close together as possible.  - George Burns 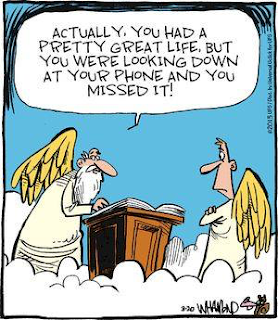 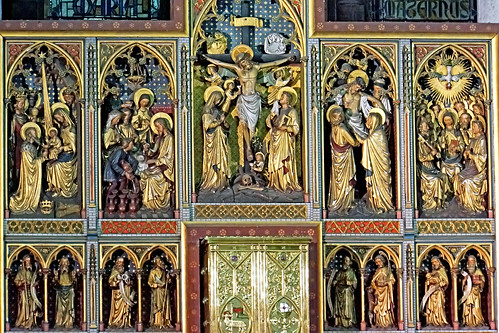 But Jesus looked at them and said, “With man this is impossible, but with God all things are possible.” - Matthew 19:26 (ESV) http://biblehub.com/ 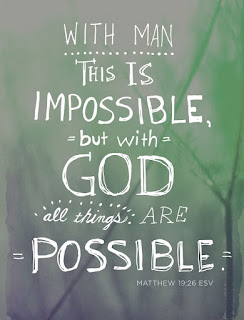 REMINDER: Bluefish Game has been cancelled

Tonight's trip to the game has been cancelled due to weather.  Keep an eye out for a replacement event. 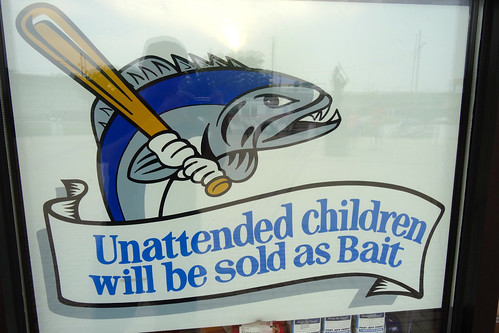