Remember, the full list of Reference Questions can always be found in the sidebar or at this link.

QUESTION:According to Matthew 1:22-23, The Lord had said what through the prophet?
ANSWER: "The virgin will be with child and will give birth to a son, and they will call him Immanuel." (cf. Matthew 2:15)

REMINDER: For those just joining us...

A few of you probably discovered MonroeBibleQuiz.Com over the summer - perhaps after the ministry fair - and have been following along.  But for most of you, this website is all new!  If so, be sure to browse some of the features we posted previously which will be of use in preparing to study the gospel of Matthew.  Click on any of the bullet points below for the associated post. 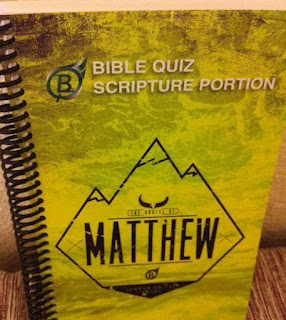 If you want to download the puzzle for this week, click here.  (Use "monroebiblequiz.com" as the password, when asked.  This link will only work for 90 days.)

Study Tip: For Bible Quizzing, we recommend at a minimum that quizzers read the chapter at least twice each day. This provides a good foundation for studying as the quizzer becomes familiar with the material. It is often good to make this a first-thing-in-the-morning, and a last-thing-at-night event, as that lodges the material in the brain for the subconscious to work on it during your day and overnight.

The Kickoff is *TODAY*

The Kickoff Meeting is immediately after church in the Youth Room TODAY, for teens and parents interested in the Bible Quiz Team.  See you soon.

REMINDER: Kickoff is *THIS* Sunday!

The kickoff for the Bible Quiz Team is this Sunday, 8/26 right after the church service.  We'll be in the Youth Room, and are looking forward to meeting all of you and talking about Bible Quizzing.  There will be snacks, and giveaways to any teens attending who want to join the team.

Keywords - also known as "once used words" - are a useful tool for the careful Bible Quizzer.  They are words used only once in the entire book being studied.  Therefore, you know if you hear that word, you know exactly where you are in the book.  Superior quizzers learn the keywords in the chapters to increase their jumping speed and refine their knowledge of the book.

For example, in this verse, the keywords are highlighted in red.


A record of the genealogy of Jesus Christ the son of David, the son of Abraham
Matthew 1:1

This means any time you hear the words "record" or "genealogy", you know we must be talking about Matthew 1:1.

If you're interested in using this valuable tool, check out the Keywords List for yourself!  (Keywords can also be found highlighted in the scripture portions we will hand out at the kickoff.)
Posted by Nomad at 8/20/2012 03:17:00 AM
Labels: getting ready, getting started, keyword list, keywords, once used words

ANNOUNCEMENT: Study Schedule for 2012 is ready!

The summer is nearly over, and many families are starting to plan for the school year.  If you or your parents are making up the calendar, you may be pleased to know our Bible Quiz Team Study Schedule is up and ready for your review.  It gives you an idea of what we'll be studying when, weeks we'll be taking "off", and even the first Quiz Meet of the year.

Be sure to keep checking back, however, as the schedule is sure to evolve as we interact with other teams and find out when the various Quiz Meets are.  You can always find the schedule in the "Useful Links" section on the right of the site!

Question: According  to  Matthew 2:18, What  was  fulfilled?

Question: According to Matthew 2:23, What was fulfilled?

In order to make it possible to figure out the context of the question, however, an exact reference is given. Likewise, the list of possible reference questions is given out at the beginning of each year, so the possibilities are limited.  This can actually make them easier to study, because you know the exact question and exact answer up front.

Be aware, however, if you answer a reference question that there is one more wrinkle in the rules.  If you "jump" on a question before the full question is asked, you must give the full question and answer to the quizmaster.  (Don't worry, it's not as hard as it sounds.)  For example,

Check out the full list.  This may very well be a good option for your study focus.

ANNOUNCEMENT: Bible Quiz Team Kickoff will be on August 26!

Are you excited about Beacon Hill's new Bible Quiz Team? Are you interested in learning more? Come on out on Sunday, August 26 after the church service in the Youth Room for our Kickoff Meeting!  It'll be a time to learn more about the Bible Quizzing Ministry, meet the coaches, and ask any questions that you might have.  There is no commitment for coming to the meeting, so even if you're just curious, be sure to stop by.  See you then!

Finish the Verse questions are often the most familiar to new quizzers, as they are essentially Memory Verses.  A static list is given out at the beginning of each year of all the Finish the Verse (or FTV) questions that will be asked, so the possible universe is well known.  The only complicating factor is unlike other questions, FTVs must be answered word-perfect, with reference.  For example, for the verse...

This is how the birth of Jesus Christ came about: His mother Mary was pledged to be married to Joseph, but before they came together, she was found to be with child through the Holy Spirit.
(Matthew 1:18)


...the format of the question and answer would be...


Question:  "Finish the Verse Question - This is how the birth..."

Answer:  "...came about: His mother Mary was pledged to be married to Joseph, but before they came together, she was found to be with child through the Holy Spirit.  Matthew 1:18"

...and missing even one word would mean the quizzer got it wrong.  The full list of questions is now online!  Check it out and consider whether Finish the Verse questions might be for you.