Today is not only a day for candy and costumes.  It is also "Reformation Day" - the anniversary of the day Martin Luther nailed his 95 Theses to the door of the Castle Church in Wittenberg.


Martin Luther was a monk and a theologian of the Catholic Church in the 1500s. He had struggled his whole life with overwhelming feelings of guilt and awareness of his own sinfulness. He finally was able to overcome this by studying the book of Romans, where he learned that salvation is a Free Gift and that Jesus Christ had already done everything required by God.  He was known for both his scholarly teaching of students, and his compelling sermons at the local church.

Pope Leo X needed money to fund the building of St. Peter's Basilica in Rome, so he sent out priests on a fund-raised selling "indulgences".  Indulgences were pieces of paper that could be bought to get loved ones who had died out of Hell and into Heaven.  (This Pope didn't start the practice.  It was well-established by this time.  But it had not been seen in Germany during Luther's lifetime.)  Some of the priests of the time were so zealous to sell indulgences that they used tactics that we'd associate with a "used car dealer" today.

Luther was outraged to see people selling Christ's "free gift".  He put together his 95 Theses - a list of 95 statements of what Luther believed to be true - and nailed them to the door of the local church.  (This was a common practice of the time for advertisements.)  He intended to have a scholarly debate on the subject with other theologians.  But copied of his 95 These made their way to Rome, and the pope ordered that Luther be tried for heresy (i.e. teaching false things about the Bible and the Church).

The trial and its results triggered the Reformation, whereby nations and churches broke away from the Catholic Church and formed the many denominations of Christianity we know today. 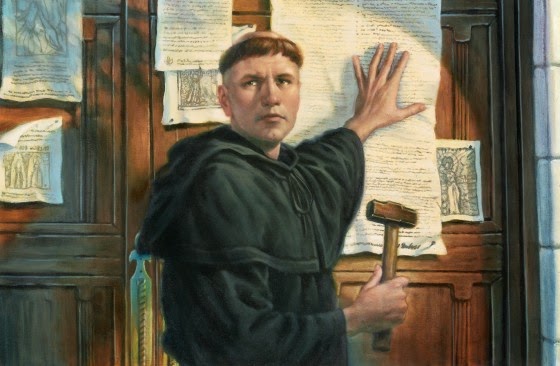