Our nation's history is deeply steeped in Biblical principles, but it still comes as a surprise to many modern scholars just how Biblically-literate the founders were.  In a new book, one author examines how the Founding Fathers - many of whom were not weekly churchgoers - studied the Bible and used it's principles in waging war during the Revolution.


“Part of this project involved combing through hundreds of sources throughout the American Revolutionary War era and before to determine exactly what the most popular biblical texts were,” Byrd said. “For example, the story of the Israelites’ exodus from Egypt was huge for the American colonists. Many viewed King George as the ‘British pharaoh.’ In addition, some of the early patriots compared themselves to David in the first book of Samuel, where David successfully battled the Philistine giant named Goliath.”Also, Thomas Paine’s Common Sense was one of the most important books written during that period. “Common Sense convinced so many people that they needed to cast off this king and declare their independence,” Byrd said. “It’s full of biblical references, yet Paine was neither a Christian nor a biblical scholar. Yet he knew that in order to convince the largest population possible, he must be knowledgeable about scripture.” 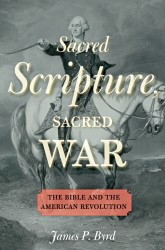