An ancient earthenware jar has been found in Jerusalem which contains the oldest alphabetical language inscription ever discovered in the region.  In general, there are two kinds of written language.  Alphabetical languages encode the sounds we make as letters - like the English alphabet.  Pictographic languages encode meaning into pictures which represent whole words - like Egyptian hieroglyphics.


Working near the Temple Mount, head archaeologist Eilat Mazar uncovered the 10th century B.C.E inscription, engraved on a large pithos, a necklace ceramic jar, along with six others at the Ophel excavation site.
The inscription is written in the Canaanite language, a Biblical people who lived in the present-day Israel, and is the only of its kind to be found in Israel. The artifact predates the previously oldest inscription found in the area by 250 years and predates the Biblical Israelites' rule. 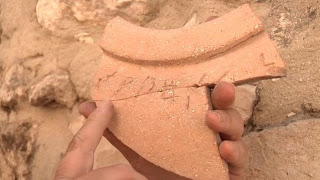