I guess the phrase "Better late than never" comes to mind here.  A man who stole a Bible decades ago from an English church has finally returned it.  The church from whom it was stolen is both amused and pleased to have a little piece of its history returned.


Simon Scott, treasurer of the Holy Trinity Church, in the coastal resort of Hastings, England, received the large, leather bound, book in the mail earlier this month.It followed an anonymous note, inside an envelope marked with a German return address, that he'd received a few days earlier from the man who said he's taken the text back in 1971...The anonymous note said: "I've never managed to pluck up the courage to come and hand it back personally. But now that I've retired, I've definitely decided to get on the right side of things.""Whenever I came across the bible I would have this guilty conscience about doing it," he added.

God says His word never returns void.  Perhaps it did some good in the life of this man, in the end. 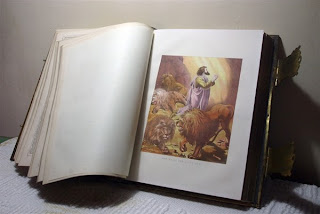